The ABCs of Music Lyrics

You crank it up while you’re driving, rely on it to fuel your workouts, and even keep it on in the background while you work. But when it comes to popular music, how closely are you really listening?

We looked beyond the melody, the pumping beats, and the artists’ popularity to tackle some intriguing questions about the lyrics of Billboard Hot 100 hits from today and years past. Which songs and artists rely on the most difficult words? Which employ the simplest language? And what types of phrases appear most frequently? Get an inside look at lyrical stylings with our innovative vocabulary analysis. 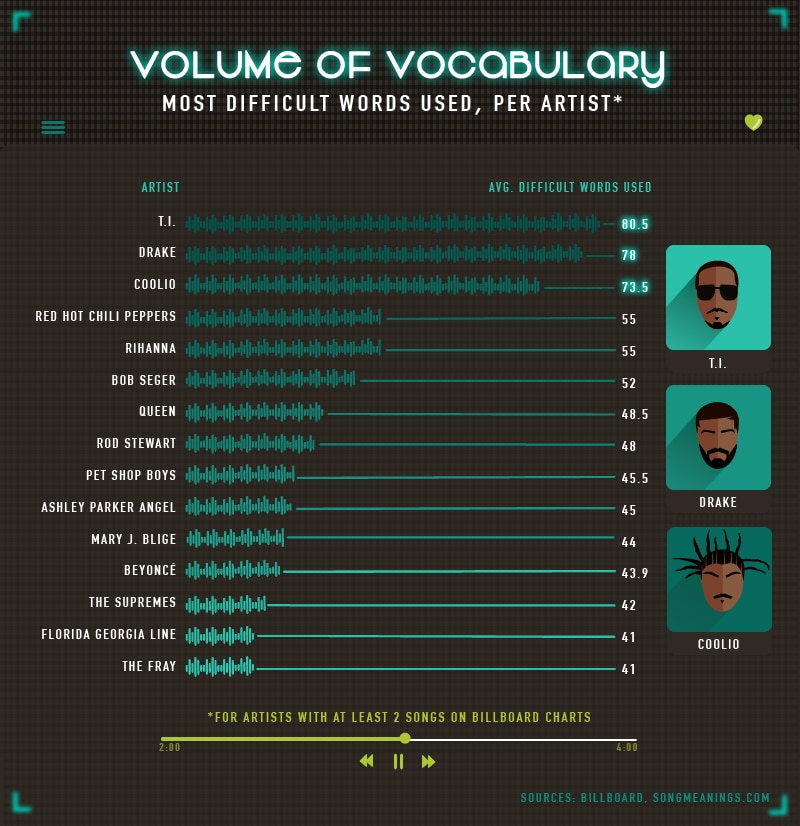 It’s been said rap and hip-hop are poetry – and our analysis reveals that may be the case. The three artists who top our charts for complexity of words in the Billboard songs we analyzed are firmly in the rap or hip-hop category: T.I., Drake, and Coolio. (We defined “difficult” words as those excluded from the fourth-grade readability level list based on the Dale-Chall readability formula.)

Though their titles are simple, T.I.’s “Why You Wanna” and “What You Know” feature fairly complex language. The former contains terms such as “relationship,” “faithful,” and “glowin’.” The latter features the words “designer” and “chirp” and the much-quoted phrase, “… all that attitude’s unnecessary, dude.”

Drake songs feature some tricky terms, too: In “Still Here,” he tosses in the verb “finesse,” uses the word “impressions,” and employs the clever phrase, “Nothing mutual about my funds.” And in “It’s All the Way Live,” Coolio works in words such as “pretending,” “diploma,” and “hustler.”

Rap and hip-hop lyrics – which tend to rely heavily on wordplay and double entendres – often fuel internet searches, analysis, and lengthy conversations. One recent study even revealed that hip-hop artists have linguistic skills that rival those of Shakespeare, based on factors such as vocabulary used and sentence structure. And along with the lyrics in this sophisticated genre, the delivery can capture people’s interest as well: Eminem once made headlines for a song in which he uttered 97 words in a mere 15 seconds. 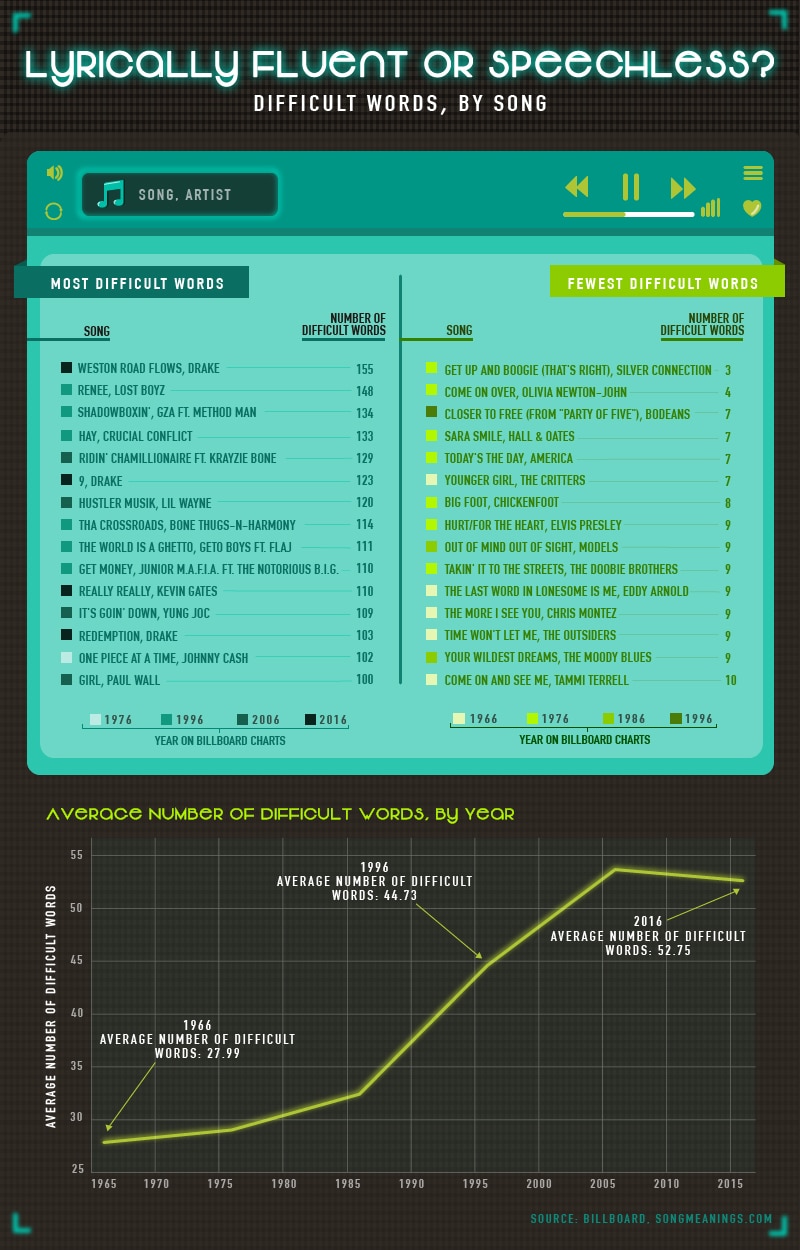 As you can see, it appears the terms used in song lyrics have become increasingly complex since the 1960s, though the difficulty has very slightly declined since the mid-2000s. To get a closer look at which genres, songs, and artists use which type of language, we zoomed in on the songs with the highest and lowest numbers of difficult words (based on the words excluded from the Dale-Chall fourth-grade readability level list).

Rap and hip-hop sweep the most difficult lyrics list, with a sole exception: “One Piece at a Time” by country legend Johnny Cash. The Man in Black’s final solo No. 1 hit, which chronicles the assembly of a Cadillac, features several complex terms, including “transmission” and “chrome.”

In first place on our list, Drake’s “Weston Road Flows” contains more tough terms than any other song. A tribute to the relationship between the artist and his hometown in Toronto, the song is rife with long words like “semester,” “depression,” and “… on occasion for entertainment.” The second-most difficult song, “Renee” by Lost Boyz features frequent mentions of the word “ghetto,” as well as lengthy terms like “candlelight” and “reminisce.”

The songs with the fewest difficult words span numerous genres – pop, rock, country, oldies, and even disco. Many of the tunes are old, the bands disbanded, or the singers deceased. Not a single rap or hip-hop song makes the list.

Topping the list with the fewest difficult words (only three!) is the 1975 tune “Get Up and Boogie” by German disco group The Silver Convention. Why? The entire song contains only six words, repeated: “Get up and boogie! That’s right!” Olivia Newton John’s “Come On Over” is also heavy on short and simple words: “If you think I need you / Come on over. 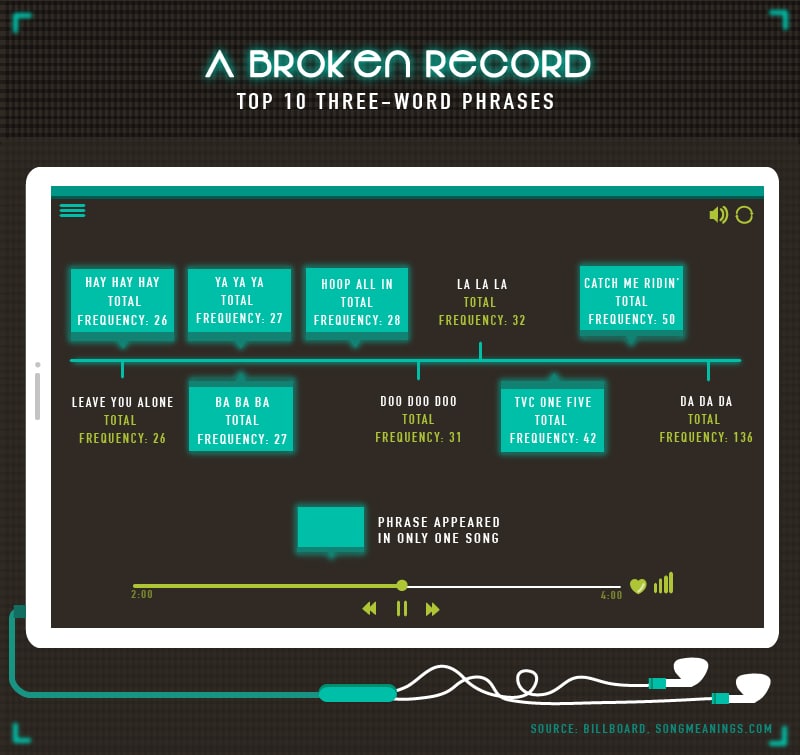 Sometimes in song lyrics, certain terms go together like peanut butter and jelly. To find out which, we ranked the three-word phrases that appear most frequently. “Da da da” is the most frequent three-word phrase, appearing in spades in songs like The Isley Brothers’ “Let’s Lay Together,” The Mamas and the Papas’ “Monday, Monday,” and Shanks & Bigfoots’ “Sweet Like Chocolate.”

Though appearing only in Chamillionaire’s “Ridin’,” the phrase “Catch me ridin’” – completed as “Catch me ridin’ dirty” – makes numerous appearances. Similarly, in David Bowie’s “TVC 15,” the phrase “TVC one five” is repeated enough to sear its way into anyone’s memory. Several of the most common phrases are more sounds than words, such as “la la la,” “doo doo doo,” and “ba ba ba.”

According to experts, repetition in lyrics can send songs skyrocketing up the charts. Repeated words make songs appealing because they seem familiar to listeners and even spark activity in the parts of the brain that register emotion. It turns out at least some songwriters are cashing in on this win-win (win) formula.

As our analysis reveals, rap and hip-hop hits far surpass other genres when it comes to complex language in lyrics. While the music sometimes gets a bad rap for glorifying drug use or promoting violence, it’s clear it can also do something positive: beef up people’s vocabularies.

Sometimes criticized for being trite and cheesy, pop and disco songs tend to rely on simpler terms. However, studies show that simplicity and repetition can hold the key to a song’s movement up the charts. Lyrics add another layer to any song, and they might reflect anything from the artist’s past to the latest news headlines. Your best bet? Crank up the volume, keep an open mind, look up lyrics you don’t understand – and remember to sing along.

We scraped one week of songs off the Billboard Top 100 Charts from each of the last six decades. We looked at songs from 1966, 1976, 1986, 1996, 2006, and 2016. Using Lyrics provided by Songmeanings.com, we were able to analyze 476 songs and their respective artists using a Python readability library. Due to some songs not being available in the database of lyrics we used, not every year we looked at contained all 100 results. To balance this out, all scores in this project are averages. When considering the artists with the highest average of difficult words, we only looked at artists who appeared at least twice within our data. Difficult words are defined as words not on a list of the Dale-Chall readability formula, which uses a list of approximately 3,000 words that groups of fourth-grade American students could reliably understand.