Inspiration- Drumming Without a Limb

Being a musician does not come easily to everyone. It takes a certain skill level that not all of us are willing to work for. Those who make it in music practice everyday and never gave up on their dreams. Now imagine working so hard to make it in the music biz, and then having a tragic accident. 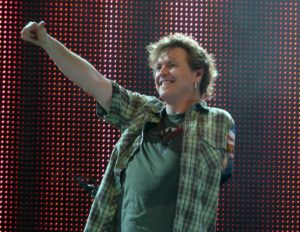 In one of the scariest and ultimately inspiring stories in recent rock history, Def Leppard drummer Rick Allen nearly lost his life and did lose his left arm in a car accident on Dec. 31, 1984. The 21-year-old drummer was rushed to the Royal Hallamshire Hospital in Sheffield, where micro-surgeons performed two operations in an attempt to reattach the limb. Initially the operations were considered a success, and Allen was listed in stable condition. However, four days later, the surgeons were giving Allen a routine check-up when they detected a severe infection in the upper part of his arm. Although the doctors said that Allen’s hand and forearm were healing well, they feared a spread of the infection, and were left with no alternative but to amputate Allen’s arm. Said a spokesman for the group, “We’re just glad he’s alive.” Def Leppard had already laid down the rhythm tracks for their upcoming album, but are unsure of what will happen next.

Rick Allen refused to give up on his musical passion of drumming. He retaught himself the drums and learned to play with only one arm. He adapted his drum set to be able to use his feet for some parts and he is thought of as a drum hero.

He’s an inspiration for all musicians struggling through life. And an inspiration to a lot of amputees. He didn’t let this tragedy tragedy stop him from continuing to do what he loved.