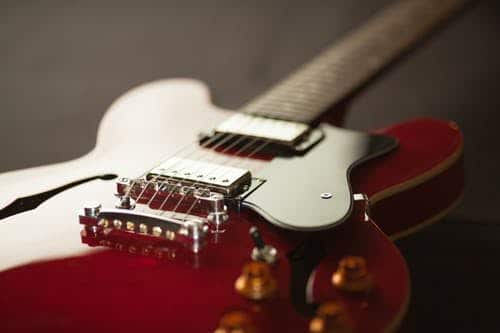 If you’re into hard rock, metal, or any other heavy music, then you’ve seen Jackson guitars in the hands of music legends since the early 1980s.

There are so many different Jackson guitars, and anyone who was anyone had one. It was at the beginning of metal, the new wave of British heavy metal (NWOBHM for short), as well as death metal.

Even today, Jackson guitars are part of music history just as much as they are a part of the future of metal.

Jackson Guitars for Everyone 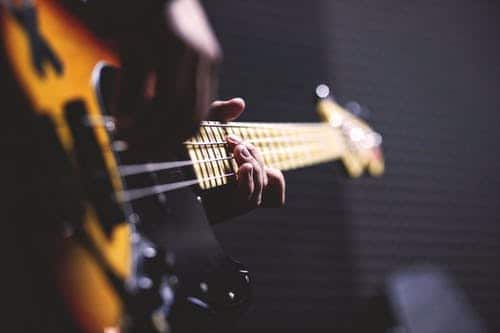 A Jackson guitar is not just a guitar. In fact, if you were to look on Jackson’s website, you would see that there are several different series as part of their overall lineup. They have guitars for all levels of musicianship in addition to meeting several levels of budgetary confinements.

The JS Series is the most affordable line of Jackson guitars. If you’re new to the style of guitar, you’ll find that you won’t sacrifice quality for price. At the same time, if you’re a long-time musician looking for a new guitar that won’t break the bank, then this is a great line to choose from, too.

The next series up is the Jackson X series. This series combines the new and the old by bringing classic designs and adding new features that keep up with the times. If you want a classic look that has integrated new tech, then this is the line to look at.

Now, the Pro Series is serious musical equipment. No, you don’t have to be a pro to want to get in on this series, but you will feel like the most well-versed professional when you play. They are designed with perfection in mind and the cost reflects those kind of demands.

The next level up is the USA Select series. It is complete with high-level guitars for the most serious musicians. You’ll have to expect to pay top dollar for guitars in this series, but these are the absolute best Jackson guitars you can hope to find.

The USA Signature Series is unique in the way that it carries guitars that are personalized by well-known artists and musicians and their favorite touches. Each one has been designed to reflect each artist’s style and talent. From Phil Collen to Mick Thomson, you’ll find several beautifully designed guitars to choose from.

If you can’t find something you like within the existing lines, you can request your very own customized Jackson guitar. It will be unique to you and is created to your specifications. You would get to choose everything from the body and neck to the bridges and hardware.

Get to Know the Soloist 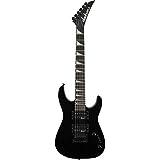 The Jackson Soloist has been one of the best guitars on the market since the early 1980s. There are electric guitars, and then there are Jackson guitars, and the people that play them know that.

The Soloist guitars were designed in the superstrat style due to Eddie Van Halen’s preferred guitar style. He influenced an entire movement that Jackson recognized and those to take advantage of.

With the Soloist guitar, guitarists could find exactly what they wanted and get an awesome whammy bridge to really make the guitar sing. Even today, you’ll find the classic look in addition to more contemporary designs, and every single one plays like you’d expect a Jackson guitar to perform.

Get to Know the Dinky

So, the Dinky looks almost identical to the Soloist, but don’t let looks deceive you. There are some key differences between the two that are often easily missed.

The Dinky is smaller in size when you compare it to the Soloist, and the construction of the neck is different.

On a Dinky, you’ll find that the neck is a bolt-on neck while the Soloist is a neck-thru design. The difference in design impacts the sound of each guitar.

The Soloist will have a richer sound, but the Dinky has a brighter, more cutting edge, sound. The difference in sound is one of the reasons that some musicians prefer a Dinky when compared to a Soloist.

If you’ve ever taken a look at some of the 1980s hard rock bands, you’ll see that most of them embrace the Dinky as their guitar of choice.

As a fun fact for you, the Dinky was the first Jackson guitar to introduce the guitar trend that swept the hair bands and other rock bands of the ‘80s – the backward headstock.

How Do You Know Which Jackson Guitar to Choose? 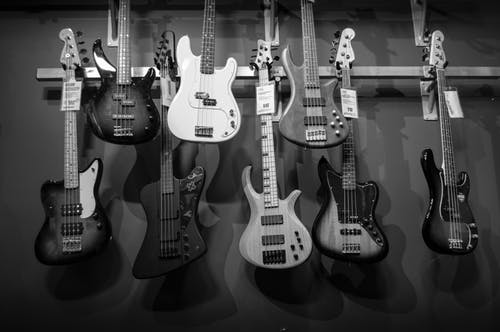 If you can narrow down which one to get, good for you. It’s tough to pick just one because they’re all fantastic instruments.

The biggest factors that you’re going to need to consider include the budget that you have to work with. If you’re on a strict budget and are a beginner, you’re going to want to start with the JS Series models. If you pick either a Soloist or a Dinky from that series, you’ll be happy to know you won’t spend more than a few hundred dollars.

On the other hand, if you’re an advanced player or someone in search of an upgrade, then you’re going to want to look at either the X series or the Pro series. Both have some fantastic options available to you that are relatively affordable for the quality you can expect.

Of course, if you’re considering purchasing a guitar from the USA Signature series, then you are likely a career musician that knows exactly what to expect. These are the absolute best Jackson guitars that your money can buy. 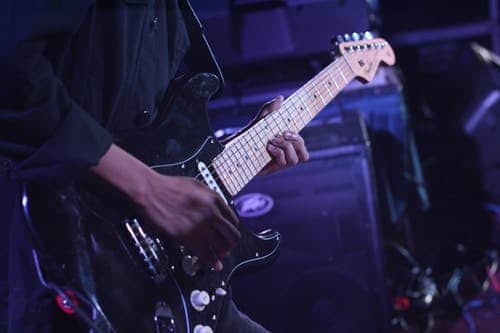 Don’t take our word for it. Check out a few of these reviews to see what other people have to say about the Jackson Soloist and Jackson Dinky guitars.

“I’ve had this guitar for over a month, and it’s a really good instrument. Obviously, you cannot expect too much for $550 but I think it’s the best value for money instrument I’ve tried. If you are thinking of buying it, I totally recommend you to do it. Personally, one of the things I look for the most (after the tone of course) is the feel of the neck, and this baby has it all. The 12” to 16” compound radius gives you a smooth play on the neck, plus the neck-through. The pickups are hot indeed, really high output. The guitar came in good conditions, but the allen keys and the tremolo arm were not even wrapped in a plastic bag, but nothing to worry about.”

When it comes to the X Series Soloist, Leandro wrote

“This guitar is exactly what I had expected…now that doesn’t mean it’s without it’s faults, but for the price, it’s a great guitar. I bought this with the intent to upgrade a few things, most importantly the pick ups. The stock pups aren’t bad, they’re just not great. Obviously for this price there are going to be some corners cut. Some of the metal is cheap, the Floyd is a Special (still better than licensed,) the volume and tone knobs (or the pots themselves) make a sound when turning up or down (inaudible through the pick ups though). As previously stated, I expected this for the price range. I own a few other guitars and I wanted this as a mid range work horse and It fits the bill perfectly.”

“The guitar will be pretty much ready to rock out of the box, came nicely packaged, and the intonation was very close; and only using my ST-300 strobe tuner I was able to improve it (the regular tuners show all good). For most ppl (sic) a regular tuning it all this guitar needs, it will play beautiful out of the box, so that is the basic review. Yes, it’s made in China, however it plays darn well out of the box.” He went on to give some specific details about the Dinky, but even still, everything was positive

Guillermo J. bought a JS32 Dinky and had plenty of positive things to say about it, too.

“In my honest opinion, this guitar is simply amazing. I love the way the neck feels and the appearance of the black hardware. I ordered what I thought would be a rosewood fingerboard but they sent me a maple fingerboard. I also ordered satin black and received gloss black finish. If I did not like the guitar so much I would have requested a replacement. The reputation of a double locking tremolo would intimidate a person who never encountered it before but the Floyd Rose has been around and used pretty consistently for years. You definitely must approach tuning a little differently but this guitar does stay in tune. It arrived in tune actually. The pickups seem to have a well balanced sound and the pickup switch will give you neck, bridge, and both. I really like the smaller size body. The guitar is not really light but when compared to other guitars it is not really heavy in my opinion.”

The Jackson JS22 Dinky has nearly 100 reviews, all of which are generally positive.

“arrived in perfect condition. It needed tuning but I expected that. It came set up right out of the box and plays great. The pickups are what most would expect, no Seymour Duncans, but sharp and crunch. Best 200 dollar guitar I ever bought. Action is smooth and low. This guitar is super fast. Trust me, it’s not too good to be true, this guitar is awesome.”

“This is by far a nice guitar. I have the satin black right now. The Jacksons humbuckers have a deep mean crunch and the price is well worth it. I highly recommend this Jackson and I plan on buying the Metallic Blue. I wish they had this one when I was starting out. Great for a beginner at this price it’s a beauty.” 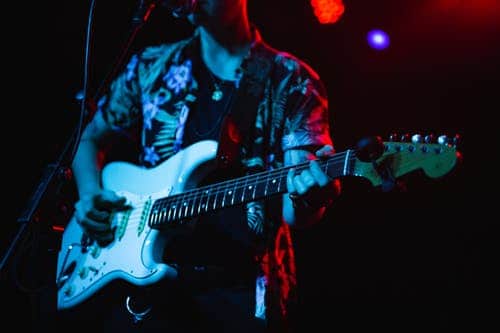 You can read reviews to see what other people think about these guitars online. The overwhelming consensus is that they are amazing in both quality and associated price.

There are models that are out there that will meet your needs. With the background that Jackson guitars have, you can rest assured that they will deliver exactly what you want.

From the JS Series to the American Signature series, you’re bound to find something that will make you happy.