What is a Resonator Guitar? – Everything You Need To Know 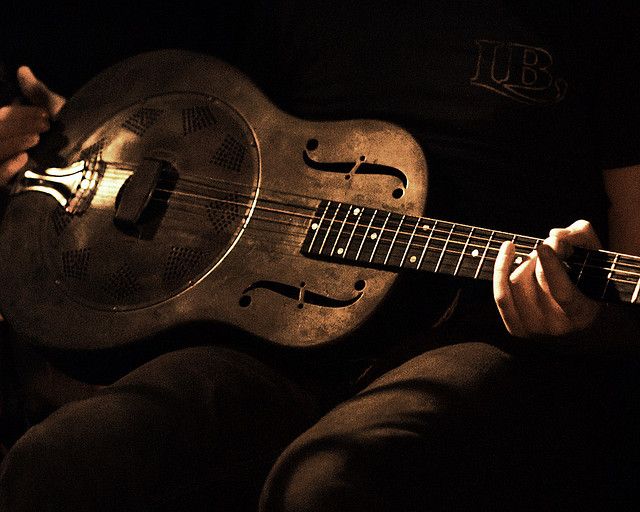 What is a Resonator Guitar

Guitars have a distinct sound. Even virtual instruments can’t replicate them with 100-percent accuracy. The reason behind that is the resonance.

Sometimes this sound quality can be imitated, even closely, with the right technology. Examples could include droning undertones behind bells or that distinct hiss at the end of a cymbal hit.

For those who have a great ear for music, the difference is a little noticeable – because resonance has a much bigger impact on sound that some would think. Think back to the guitar again – particularly, the acoustic guitar.

Called everything from a flat top to an air box, these instruments produce sound thanks to the sound board on top and the sound hole which allows sound waves to resonate around inside.

This produces rich, thick tones that makes it easier to become immersed in the sound. But even for acoustic guitars, there are many different variants out there.

Each falls under the same umbrella of acoustic instruments, but they have their own distinctions. In some cases, this could be because of a semi-hollow design with f-holes.

In others, it could be because of an amplification option thanks to onboard electronics and equalizers.

But there’s also the resonator guitar – an instrument that is unique in looks, sound, and design. What exactly is a resonator guitar? Where is it used? And what is it about the sound quality that makes this instrument different from others?

An Acoustic Guitar with a Unique Twist

A resonator guitar is technically an acoustic guitar. This simply means it derives both its sound quality and volume levels from the body shape and design.

Though it is possible for a resonator to have electric components, it’s the physical components themselves that produce reverberation and thus account for most of the sound quality.

When a person first sees an inventory full of resonator guitars, they may be a bit taken back by the sight. This is especially true if they’ve only seen traditional acoustic guitars before.

While these guitars do have the big bodies to encourage sound reverberation, they also have spun metal cones. These cones can come in varying amounts, and, appearance-wise, they look like large metal plates where the sound hole of an acoustic guitar usually is.

What does this mean as far as design? Combined with the f-holes which are often placed on the body above the cones and on either side of the neck, this allows for a deep and rich rumbling sound when a string is hit.

Just as sound waves can resonate in the body material and cavity, they can also resonate through the metal cones.

These guitars have a bit more punch, and can be effective at cutting through a jam without having to use amplification.

While resonator guitars are a type of acoustic guitar, they’re in a class of their own. But even within this distinct line, there are variations to choose from.

Resonator guitars are unique in both their appearance and the type of sound they produce. Both of these qualities make resonator guitars stand out from similar instruments.

But what about the various types of resonator guitars? Here’s a brief look at the numerous types you can find when shopping for a resonator.

Tricone guitars, as the name suggests, use a combination of three cones to produce the sound. This instrument type was first popularized by the National String Instrument Corporation. More cones can mean more resonance and a sharper overall sound. Also known as the “biscuit” design, this single-cone style offers the distinct sound of a resonator guitar without as high of a price tag.

Models like this can be found in National’s inventory, as well as many other popular instrument manufacturers’ inventories.

Also known as a “spider bridge”, the inverted cone looks just like a spider’s web. It has a unique, overlapping design that facilitates more sound reverberation and allows for a greater amount of resonance – in terms of both quality and sustain.

While these are the variations of the resonator guitar in terms of the cones, there’s also a couple of options for the necks.

There are resonator guitars that feature standard rounded necks, meaning they can be played just like a standard acoustic guitar. However, there are also squared neck models, which are played like a lap steel.

Which option is superior? It depends on what a player is looking for in terms of sound quality and playstyle.

But there’s also the fact that some genres rely on instruments like the resonator more than others. Let’s explore the history of this instrument and what settings it has gained the most popularity in throughout the years.

The History of the Resonator Guitar

Acoustic instruments have a certain sound quality that is hard to replicate. Some may even argue the sound loses a bit of its natural timbre when you put it through a preamp or microphone.

But this leads to another problem – even if the quality of natural acoustic tones sounds good, it can be hard for them to compete with other instruments.

George Beauchamp requested a guitar be developed to help him compete with the volume of brass and reed players he jammed alongside of.

John Dopyera experimented with metal cones to help produce a more resonant acoustic guitar that steel captured natural reverberation effectively. The result was the first national tricone guitar, and the rest is history.

Drawing influences from both the dobro, which debuted only shortly after, and the steel guitar, this type of instrument continued to evolve.

Manufacturers began experimenting with different types of materials, using wood, metal, and even other substances on occasion to build resonator guitars.

From Fender to Epiphone to Gretsch, there are plenty of popular instrument makers that build quality resonators.

Their workmanship is transferred into the resonators’ unique cone-based construction, allowing for punchy sound that retains its natural qualities and can be heard even alongside other loud instruments.

But what about genres? Are resonator guitars specific to certain genres, or at least more prevalent for certain styles over others? What Styles Typically Use Resonator Guitars?

Technically, any musical instrument can be used for any style of music. Trying to say some instruments should be locked into certain genres is limiting, and against the artistic spirit of music.

However, there are some styles where the resonator has been historically more prevalent. For example, bluegrass musicians who enjoy acoustic sounds may be more inclined to use a resonator.

This is especially true if the guitarist has to play alongside a rumbling double bass, or other high-resonance instruments like banjo, mandolin, or dobro.

Resonator guitar playing can also sound right at home in country music. The metallic-like resonance can produce the familiar twang of a steel guitar, especially if the instrument has a squared neck where slides can be used with ease.

Blues is also a popular genre for the resonator. Acoustic blues often made use of acoustic guitars, and a resonator gives musicians the option to boost their sound volume or easily incorporate that unmistakable slide sound.

These certainly aren’t the only genres where the resonator would be right at home. Rockabilly, gospel, folk, and many other styles of music can make use of the combination of natural tones and high volume.

Even without a pickup or microphone to help it cut through the mix, the resonator can offer an impressive dynamic range.

For the musician who is just starting, how easy would it be to adapt to a resonator guitar? What about the guitarist who has a history of playing regular acoustic, but wants to try out a resonator to see how different it is?

Who Could Benefit from Owning a Resonator Guitar?

Sometimes the strings may be a little higher, but only if they’re going for the slide option – where, in that case, the heightened action is a product of design. But for the rounded-neck models, a resonator can be just as good as a standard guitar.

For the seasoned guitarist who wants to try something with a little different sound, it may not take them long at all to get used to the changes of a resonator.

Provided they choose the style most similar to their playing (regular neck vs. slide) they can usually pick up a resonator and play just like they would on a standard acoustic guitar.

When it comes to musical instruments, few look and sound as unique as the resonator. This instrument has influenced many genres and other instruments throughout the years, and offers guitar lovers a perfect balance of acoustic tones and booming sound.