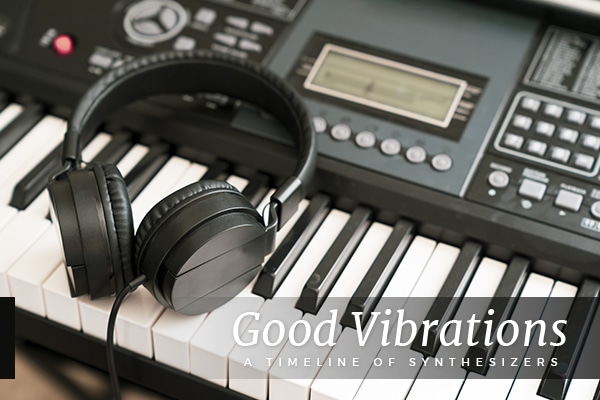 The Key to Synthesizers: A Beginner’s Guide

It's been used both to invoke a sense of the future and to hark back to a dated and nostalgic sense of the past.

No matter where or how you've heard it, you know the sound:

From Stevie Wonder to Kraftwerk to the Beatles, synthesizers have featured prominently in some of the best-loved and most adventurous music of the late 20th century and some of the most memorable soundtracks from the 1970s onwards.

So just what is a synthesizer?

What a Synthesizer Is

In the loosest sense, a synthesizer is an electronic device which synthesizes electronic signals that are then converted into sound. Hundreds of different keyboard, string, and percussion instruments have been built on this pattern.

For example, US inventor Elisha Gray developed the "Electro-Harmonic Telegraph" in 1876, a simple combination of a basic oscillator controlling tones through steel reeds and played through a crude speaker.

The early 20th century saw the invention of such famous early synthesizers as the musical saw-like Theremin and the Ondes Martenot, both prominently used in various radio, television, and film productions such as Lawrence of Arabia and First Man.

The ghostly and unusual tones produced by these instruments struck a chord with listeners accustomed to analog instruments. The strangeness of these sounds was as important a factor in their success as was their musical value. The fact that they relied on electricity to produce and emit sound further bolstered their novelty appeal.

But these were still a long way off from the classic portable keyboard synthesizer we want to know about.

So where did those come from?

To answer that we have to turn to 1964 when inventor Robert Moog used state-of-the-art technology to create the first true synthesizer. Affordable transistors, electronic components used to amplify and switch electric power and signals, had become widely available.

Moog, who had previously constructed several theremins using much bulkier vacuum tubes, used transistors to create a piano-like electronic device. While not quite portable, they were certainly more compact than earlier electrical instruments such as the 200-ton Telharmonium.

To learn how a synthesizer works, we need to break down the components.

Here's a basic model of the function:

Press a key, which activates a circuit, sending an electrical signal through a transistor and then through a speaker as a coded tone.

That's pretty much it.

These were the synthesizers that made a name for the instrument and Moog Music, used by such musicians as the Monkees, the Rolling Stones, the Doors, Pink Floyd, and Stevie Wonder.

Here's what that means:

Audio signals are input to the synthesizer as numerical information, either as an external sample or as a preset synthetic sound accessed through an instrument-like interface like a keytar.

The signal changes via simple commands such as...

That combines the numerical data of the signal with the equivalent information from the input - i.e., the sounds you want to make through the use of a keyboard.

In this way, the musician has greater control of the pitch, length, and variety of sounds at their disposal, since DSP offers far greater versatility than the more basic analog signals of the past.

So now that we know the difference between these two types of synthesizers let's see what they have in common.

Basic Components of A Synthesizer

Think of an oscillator as the vocal cords of the synthesizer: just as your vocal cords vibrate when you sing, the oscillator oscillates (similar to vibration) to produce sound.

For example, if you press a half-tone key and A# comes out of the speaker, that's because the key has passed the signal for A# through the oscillator, which then responds with the appropriate sound.

Modifying the frequency of the oscillator changes the pitch, allowing the player to produce higher or lower sounds.

An envelope is the preset information describing how a sound changes over time. It's based on four parameters using the acronym ASDR:

Attack: the amount of time from when, say, a key is pressed to when the sound is fully made. If you press a key slowly, the attack time builds equally slowly, while a quick tap of the key results in a more urgent sound.

Decay: the time it takes for the sound to descend to what's called the sustain level.

Sustain: refers to the steadiness of the sound so long as the key is held.

By building envelopes into a synthesizer, the manufacturer can guarantee uniformity and reliability of sounds, thus making the tasks of composition, transposition, and performance much easier.

These are really important for a process called subtractive synthesis, in which frequencies are subtracted from sounds to alter them.

Essentially, a filter is used to stop some signals getting through while allowing others to form the final sound. It's these more than anything else that's responsible for the unique tone of each synthesizer.

These are mainly used in analog synthesizers, but because digital synthesizers largely imitate their predecessors in many ways, digital instruments are usually equipped with near equivalents.

Low-frequency oscillators (LFOs) are special oscillators which are used to inject audio effects called pulses and sweeps into sounds. Some common ones are tremolo, vibrato, ripples, or different bass sounds.

A popular one is the "wobble" or "wub" bass effect common in dubstep, a familiar pulsing, throbbing bass. This can be achieved in a number of ways, for example by using LFOs to alter the function of a low-pass filter (see above).

Amplifiers are a bit more significant than their name might imply. While they can certainly be used to amplify output sounds, they can also be connected to just about anything - foot pedal, dial, switch - to create a volume control; to create a wide variety of tremolo effects; and, because they alter volume, they can be used to temporarily modify envelopes for the duration of a performance without permanently changing the sound of the synthesizer in question.

So now that we know what synths are made of, how are they played?

Well, keep in mind that, even if synthesizers seem complicated and futuristic, they're still instruments, and you need an appropriate interface to be able to create music. In digital synths, these are called Musical Instrument Digital Interfaces (MIDI).

So here are a few different ways you can bring out that Devo-esque noise we all love.

The classic. Sometimes it just doesn't make sense to reinvent the wheel, and since the piano is already widely regarded as a near-perfect composition tool, it makes so much sense to use a method that gives the musician three octaves and half tones all the way down.

These were used for the earliest modular (meaning made up of different optional components) synthesizers, such as the ones used by Keith Emerson and Stevie Wonder in the 1970s. Because both of these musicians, like many others, had been taught to play the piano as children, they transitioned smoothly from playing older keyboard instruments to the new ones.

When the relatively affordable Yamaha DX-7 portable keyboard synthesizer was released, at a cost of $2,000 ($5,150 in 2019), many musicians could easily switch over to a completely new set of sounds and options for effects and modulations, largely because of the popularity of the piano.

Similar to this is the fingerboard, which resembles the keyboard in its layout but lacks keys, and is either touched lightly or stroked for different tones or sounds.

...famed for its use by everyone from Depeche Mode to Steely Dan and the New Romantics.

More properly called the MIDI Controller - the original - the keytar, despite its appearance, is a fully portable synthesizer, with a small keyboard input within easy access of the player's fingers and the guitar-like "neck" carrying the different effects parceled out from the various components.

While this unusual-looking (and -sounding) instruments reached the height of their popularity in the 1980s, at a time when everyone seems to have decided that "the future is right now," they slowly declined in use throughout the '90s, gaining a reputation for being both dated and limited.

After all, many synth-players realized that their audiences weren't particularly bothered if they couldn't cavort around the stage while playing, especially if they were able to produce more varied sounds with a larger stationary keyboard.

These are built very similarly to wind instruments, in order for brass and woodwind musicians to use synth technology. They usually create digital or analog input through one of two methods.

Wind controllers have a couple of drawbacks.

For one, almost every synth interface available is geared for a keyboard interface due to their enormous popularity and near-synonymousness of "synth" to "keyboard."

Second, wind controllers are extremely sensitive by necessity, meaning a musician needs to be exceptionally skilled and well-practiced to deliver even a capable performance using one, let alone a great one. For these reasons, they can be daunting but are incredibly rewarding to the artist who manages to succeed with them.

Just as the name implies, these are synthesizers in guitars' clothing, if only figuratively. One of the older styles of the non-keyboard interface, these offer the same appeal to guitarists that wind controllers offer wind musicians - an easy transition from one instrument to another through familiarity.

While some are more obviously guitar-based by having strings and a recognizably guitar-like body, some others are entirely electronic, using a touch interface on a screen.

Especially popular in prog rock and jazz, artists as varied as Robert Fripp of King Crimson, Jerry Garcia, and Eric Clapton have made use of these.

Although they've come a long way from the early analog instruments used in late '60s rock and experimental music, synthesizers continue to make a buzz in whatever genre they're played in. So whether you're looking to learn to play one yourself or just listening out for them, keep these things in mind, and you're sure to appreciate the complexity and artistry behind their construction and the musicians who play them.

The discovery process of trying to find the right way to produce that unique sound made way for synthesizers that looked more like workstations and control panels, filled with knobs and dials.

That's a pretty long way from the sleeker, key-oriented synths we have available today.

It's been a wild journey for synth manufacturers and musicians, but here's a look at how this amazing instrument has evolved over the years