How To Learn Flamenco Guitar – Style, Sound And More 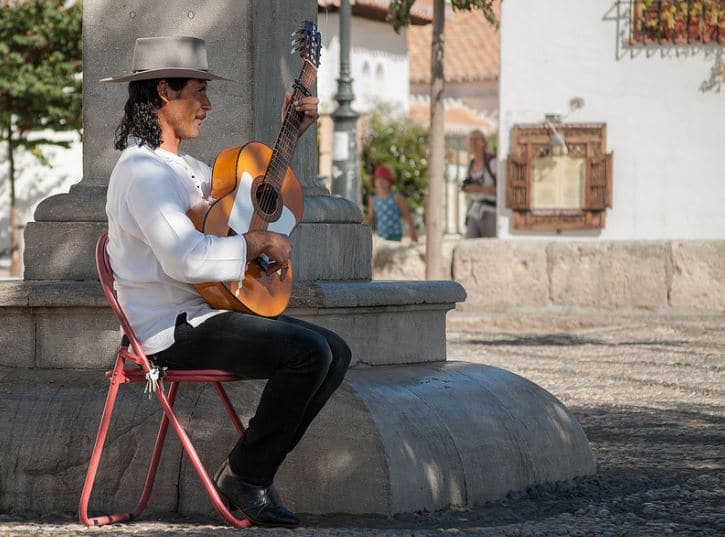 The guitar is one of the most popular instruments of all time. It has lasted throughout the ages, transcended musical genres, and seen various incarnations.

The most popular guitar types out there are usually the electric and acoustic – for the sake of this piece, we aren’t counting basses.

We’re looking at the classic six-string setup, with the EADGBE tuning (or whatever you prefer).

From slide guitars to resonator guitars, there are plenty of variants out there that offer a unique look, but more importantly, a unique sound. It’s great for producing unmatchable tone, but playing a unique type of guitar also carries its own learning curve.

Take flamenco guitar. It’s a variation of classical guitar, and one of its closest relatives. Looking at a classical guitar and a flamenco guitar side-by-side could trick some people. But the look is distinct as is the sound. The unique tones provided by this guitar are very popular in a variety of music circles including the guitar’s namesake, flamenco, as well as salsa, dance, and various others.

But what about the learning curve – is it hard to learn flamenco guitar? Whether you’re starting fresh, coming in with a musical background, or even with a guitar background, how long will it take you to pick up this style?

Quick Navigation
The Style and Sound of Flamenco Guitar​
Electric, Acoustic, and Bass Players: How Easy Can They Learn?
Do Casual Musical Backgrounds Help When Learning Flamenco?
The Final Verdict: How Difficult is Flamenco Guitar?

The Style and Sound of Flamenco Guitar
​

From humble beginnings in the form of bowl harps and tanburs, guitars have come a long way over thousands of years. Some people may love the deep and crisp sound of an acoustic guitar. They may grin upon hearing a screaming electric guitar cranked up to ten. But the sound of a flamenco guitar is unmistakable.

The sound comes from the design. Like most classical guitars, flamenco guitars utilize nylon strings. This affects the tone and resonance, allowing for a different sound quality than the standard steel strings you’d find on a regular acoustic guitar. You’ll also feel the difference if you’ve ever held a classical guitar then hold a flamenco guitar.

With less wood on the body’s top and less bracing inside, the flamenco guitar can offer a very nice mellow sound, mixing punching mid-range tones with good bass resonance. With the right approach to playing, a guitarist can get a lot of different sounds out of it – but how does a person approach the flamenco guitar from a playing perspective? What are the right techniques to use?

For starters, it is important to know that flamenco guitar is similar to classical guitar in that it is played with the fingers. Each has their own letter, which is used on sheet music to tell the performer which digit to use for which notes. The thumb (P), index finger (I), middle finger (M), and ring finger (A), are all used, while the pinky only sees action when the piece calls for it – which isn’t often. The term PIMA is often used in classical guitar circles and flamenco guitar circles to make things easier to remember.

When a flamenco guitarist sits down to play, they’ll need to have the right posture and positioning. While sitting upright with the guitar supported by the leg, body, and arms, the guitarist will rest their thumb on the top string and have easy access to all other strings with their fingers.

But how hard is it to actually get the fingers moving, and feel comfortable making music?

Every instrument is different, and the capacity of a person to learn it depends on various factors including their musical background, aptitude when it comes to new challenges, and the methods they use to gain knowledge.

For the sake of being thorough, we’ll look at three different categories of people and explore how they may fare when it comes to learning flamenco guitar.

Electric, Acoustic, and Bass Players: How Easy Can They Learn? 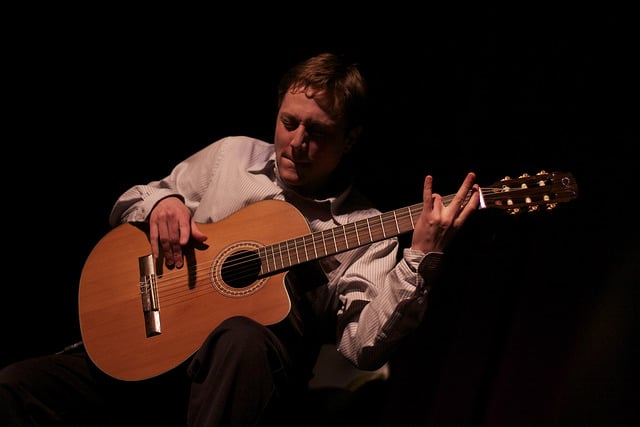 Let’s say someone has played guitar a lot – either electric or acoustic, and we can even throw bass in since it also utilizes finger-style playing. If a person knows a lot about these instruments, how easy will it be for them to transition to the flamenco guitar?

One thing that will immediately be different for the standard electric or acoustic player upon turning to flamenco is the plectrum hand – or the hand that does the picking. Flamenco players use their fingers rather than a pick. This may not seem like a big change, but it’s actually huge.

Consider how novice guitar players struggle to move the pick when they first begin. It’s a strange motion to make with accuracy, consistency, and speed if you aren’t used to it. It takes a lot of time to build up proficiency with this motion, and therefore the same amount of time will need to be spent learning how to use the fingers.

Picado, a term used to describe playing single notes usually with either the index or middle finger, is usually the right way to start. For strumming, flamenco guitarists use a technique called rasgueo, which is a strumming technique that requires a rotation of the wrist so all the fingers can be utilized.

Bass players may adjust to the finger style a bit better, though many bassists rest their thumb on their guitar’s pickup – meaning moving it down to the top string can seem a little awkward. Add in the fact there is less space between the strings and this presents a learning curve as well.

The benefit for these types of musicians is that they likely already know scale shapes, modes, and chords in standard tunings. Therefore, it isn’t too hard because the fretting hand won’t change much. 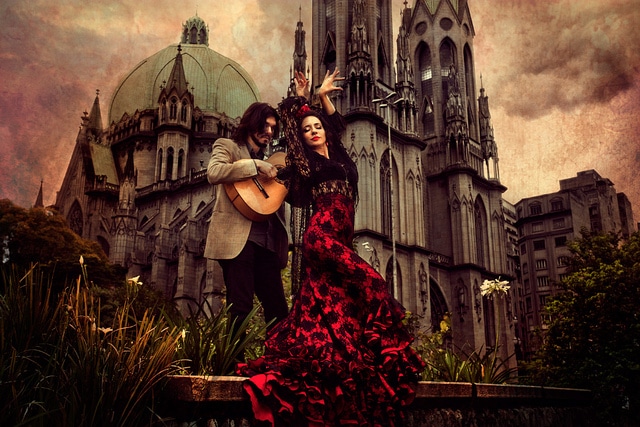 Let’s say you have a bit of a musical background. Maybe you took piano lessons as a child, or played a band instrument in high school. You may not know the difference between Lydian and Mixolydian mode, but you know when something sounds in tune or out of tune. How quickly can you pick up on flamenco guitar?

The positioning may seem uncomfortable to you at first. This is true no matter what type of guitar you’re learning. The fretting hand is positioned in an awkward manner that feels very uncomfortable at first, while the plectrum hand must also build up a decent amount of strength to be able to pluck notes consistently.

While a non-guitarist won’t have the advantage of knowing patterns on the fretboard, they do have one advantage – they haven’t built up any other guitar playing habits. When a person is used to using a pick, it can sometimes be harder to retrain the hand and wrist to switch to finger style. If a person is learning from a clean slate, they can sometimes pick up the flamenco style easier.

A person with a musical background may also be able to pick up on the basics quicker even if they don’t know the fretboard – scales, arpeggios, and chords will likely come easier and can be grasped with greater ease. But what if you have no musical background at all?

Starting New on the Flamenco Guitar 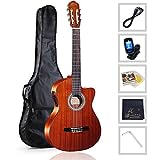 Let’s say you have no musical background at all – you don’t know your scales, you’ve never spent much time (if any) playing an instrument, and you want to learn flamenco. Will it be challenging? Yes – but how challenging?

For starters, you’ll have to learn the unique finger style of flamenco while you learn the music theory aspect as well. But sometimes, this can be easier – you may find that putting it all together helps save you time. For example, doing standard rest strokes (which see the finger pluck one string then rest on the string above) can be used to run standard diatonic scales – as in the major or minor scales.

Therefore, you can practice both at once, saving time and even making it a bit easier to remember both. It will still be hard, and much harder than if you had a background in music or especially in guitar.

But making the flamenco guitar your first instrument will likely make it your best if you stick with it. You’ll learn your music theory as it pertains to the guitar, and vice versa. It will be a challenge, but one that any person can master with the right instruction and enough dedication.

The Final Verdict: How Difficult is Flamenco Guitar?

The unique style of finger picking they use is responsible for much of the sound’s unique tone, but it is also a tricky motion to master. Combine this with the fact that flamenco uses many unique chords and scales, and it is a daunting but rewarding challenge.

Flamenco guitar may be tough to learn, but the more you practice the easier it gets.

Remember, the discomfort and awkwardness you feel when plucking the strings won’t be there forever. Once you build up proper strength in your hands, the struggle will dissipate to a large degree.

In addition, the more theory you learn the easier it will be to find your way around the neck and play all your favorite flamenco songs – or perhaps even write your own!