There are many different types of electric guitar to pick from out there, and you want to pick the one that will fit your style and needs as a player. Among the vast array of guitars available are an assortment of electric guitar types. Not only will the guitar body types vary in size and feel, but they will vary in scale length and sound as well.

Use this list of guitar types to help you choose what is best for your music to be the next jukebox hero. For more on electric guitars check out our Ultimate Buying Guide for Electric Guitars.

What Are the Types of Electric Guitars?

One of the most commonly used electric guitar types for many genres of music is the solid body electric guitar. It is called a solid body because the actual body of the guitar is made up of either a solid chunk of wood or a few different pieces fused together to emulate an actual single piece.

These types of guitar are common in blues, country, rock, metal, pop, jazz, and almost any other genre you can think of. This type of guitar can handle distortions and effects very well and is very versatile in tone. The solid piece of wood is supposed to resonate well and provide maximum sustain. Since this is such a common body style there are also many brands to choose from, which will give you a plethora of choices to match your budget.

Not as common as the solid body, but still popular with blues and jazz players, is the semi-hollow body guitar. These types of guitar are so named because the body is typically hollowed out on the edges while still being solid along the middle of the body.

Unlike the solid body, semi-hollow body guitars sometimes have less of a sustaining factor and more of an airy quality about their tone. Don’t let the lesser sustain fool you. These guitars still provide some very warm and vintage tones. The semi-hollow body resonates in a way that is reminiscent of an acoustic instrument bred with an electric guitar.

Semi-hollow body guitars are typically larger than their solid bodies counterpart and can often have f-holes or some other sound holes along the edges of the body top. The size of this guitar is something to keep in mind for comfort reasons. Strapping on a semi-hollow may be out of your wheelhouse if you plan on jumping around in a rock show.

There are many brands to choose from, though not as many as with the solid body guitars. These guitars may also run higher in price with the common brands that make them.

A close cousin to the semi-hollow body that was introduced a little earlier in history is the hollow body guitar. Originally produced so guitarists could be heard over full orchestras. As the name suggests it is a hollowed out body, much like an acoustic guitar, with f-holes or no holes at all. The sustain factor in these types of electric guitar is not on par with the solid bodies, but don’t count out the hollow body as obsolete.

The hollow body guitar is more consistent with jazz, blues, and even some folk music. Something to keep in mind with hollow bodies is that of all the electric guitar types these may be the rarest in quantity and variety. The brand names that produce these hollow bodies today will usually run you a high price so you should consider this when choosing your guitar, especially if you are a beginner. Hollow body guitars are in no way off limits to beginners, but they may not be the best option for learning on a budget.

The Stratocaster (also known as a “strat”) was designed by Leo Fender in 1954. It is one of the most recognizable shapes in guitars and without a doubt one of the most popular and emulated. With its double cutaway design for access to the higher frets, narrow V-shaped neck for easier playability it is also one of the most comfortable.

Traditionally a strat is built out of an alder wood body, a maple neck, and a rosewood fretboard, with three single-coil pickups and Fender’s proprietary tremolo bridge. Although there have been countless variations like changing the pickups or woods, the strat is usually characterized by its clean and crisp tone which is primarily due to its 25.5″ scale length–a great choice for solos and leads. It has been used by pretty much every genre of music there is because of its versatility.

The Telecaster (also known as a “tele”) was also designed by Leo Fender in 1950. It was the first commercially successful solid-body guitar, initially a favorite of country players because of its clean sound and because initially it only had one single coil pickup it had a very twangy tone.

A second single coil was added to the design in 1951 and the tele as we know it today was born. With the single cutaway body, two single coil pickups and Fenders proprietary ashtray bridge. The body was designed very thin and light for ease of play, which also gave it that signature sharp tone of a telecaster. Traditionally the tele was built with an alder wood body with a maple neck and fretboard, although there have been variations about as broad as the strat. 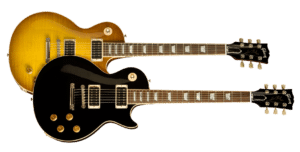 The Les Paul was designed by Ted McCarty (then president of Gibson) and his design crew, with some input from guitarist Les Paul. The Les Paul became the go to for guitarists that wanted that full tone. It was built with a mahogany body, mahogany neck with a rosewood fretboard and a single cutaway body.

Originally the electronics were to P-90 double coil pickups with a tuno-matic bridge, however, in 1957 the humbucker double coil became popular and so the Les Paul incorporated the humbucker and has used it ever since. The Les Paul has been produced with a wide variety of woods and pickups but the main characteristic of the LP has always been the rich, full and warm body sound along with a thick bass that became the sound of many rock or metal players.

The Les Paul SG was also designed by Ted McCarty and his team, however, this time Les Paul was not consulted and even later expressed he did not approve of the new body so the Les Paul name was removed and it became just the SG. The new body was designed to replace the original LP which was originally considered a failure.

So the new design used a double cutaway design, a thinner body, a thinner neck and attached the neck to the body at the 22nd fret instead of the 19th with a smaller heel. All of this was done to create “the fastest neck in the word” which became the advertising slogan for the SG. Indeed the new design was even easier to play and because of the slimmed design it had a sharper tone but it still retained a good bit of that rich sound people wanted from Gibson.

The design still kept the two humbucker pickups and tunomatic bridge with a mahogany body, mahogany neck, and rosewood fretboard. But, they have since released different versions (some even to include a bigsby bridge). If you’re looking for a super fast and easy neck from shredding solos with a rich but clean sound, keep an SG in mind.

There are a plethora of guitar makers and bodies out there. Some of the other classic bodies include the Fender Jazzmaster (meant to be the more expensive alternative to the Strat and advertised for jazz players. It also became a favorite for surf rock for it’s warm and mellow tone), the Gibson Explorer (Gibson’s attempt at a futuristic guitar design), the Gibson Flying V (this became popular for its unique design but the sound was nothing special and they were incredibly difficult to hold).

The ES-335 was the first commercial semi-hollow guitar made in 1958. It is a thinline archtop, meaning the width of the guitar was kept down but the top of the guitar still had that classic hollow-body arch. Modeled after ES line (which stood for Electric Spanish) it was a successor to the ES-150 which was the original semi-acoustic guitar.

The main difference was the 335 had a solid block of maple down the center of the body giving it better sustain. The use of a tunomatic bridge with two humbucker pickups, with a maple body, a mahogany neck, and a rosewood fretboard meant the 335 had an incredibly warm and full sound that became a favorite for blue, rock and jazz.

The 330 was/is one of Rickenbackers most popular guitars. The semi-hollow was made of a maple body, with a maple center block, a three piece maple, walnut laminate neck and rosewood fretboard. Launched in 1958 its unique design which include a trapezoidal f-hole and the “R” shaped tailpiece/bridge set. It also included two single coil pickups to give it a more clean punch to the tone along with the semi-hollow fullness. 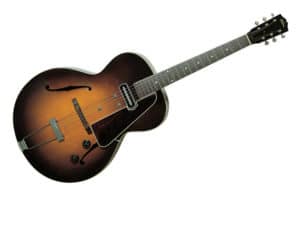 In 1936 Gibson launched the ES-150 (for Electric Spanish because it was modeled after Spanish acoustic guitars) as an experiment to test electric guitars. The 150 actually stood for its sale price of $150. It was built with a spruce top with f-holes and maple back/sides, a mahogany neck and rosewood fretboard with a single coil pickup located near the neck. This guitar was the first commercial hollow-body electric.

Originally meant to be a showpiece in the 1954 NAMM show, it was designed by their marketing strategist Jimmie Webster to be a “dream guitar” gathering inspiration and parts from the various production lines within Gretsch.

Responses were so popular that they started production and officially launched the White Falcon the next year. We couldn’t NOT include the White Falcon. It became such an iconic hollow-body that it’s still in production today. It’s body is a spruce archtop, with maple back and sides, a maple neck and ebony fretboard. From 54-58 the electronics were two single-coil pickups but after 58 two humbucker double coils were added and it’s been that way ever since. The White Falcon has been tweaked continually over the years, after 1962 the bridge was replaced with a bigsby tremolo, but the sound has always been an incredibly warm and rich tone, great for jazz and blues.

Final Thoughts on the Types of Electric Guitars

This list should serve as a starter guide to any guitarist, new or experienced, who are looking for the perfect electric guitar that matches their playing ability, style, and budget. The different types of guitar bodies and shapes will offer an appeal to the ear and the eye depending on your taste. The most important thing to remember is to pick the guitar that feels and sounds best to you.

Once you’ve figured out the guitar type you want, next will be to determine the hardware you need. What kind of necks do you prefer? What type of guitar strings are best for your style? Is it more scales oriented or chords, and what type of picks do you use? What kind of pickup/pickups do you need? Do you prefer magnetic pickups?

Then, you can move on to the electronics. What kind of amps are your style? Which effect pedal/pedals do you need? Make sure to pick a great tuner as well. Stay tuned as we keep delving into these questions to provide the best guide for exploring guitars and buying what‘s right for you.