Here at BuzzHarmony, it’s our job to keep you up to date on all things new in the music scene. We’re always trying to scope the latest BUZZ for you guys and we’ve found the perfect thing! A rising band: Dry Jacket. We got to sit down with members of the band and get the inside scoop of their music and tour. 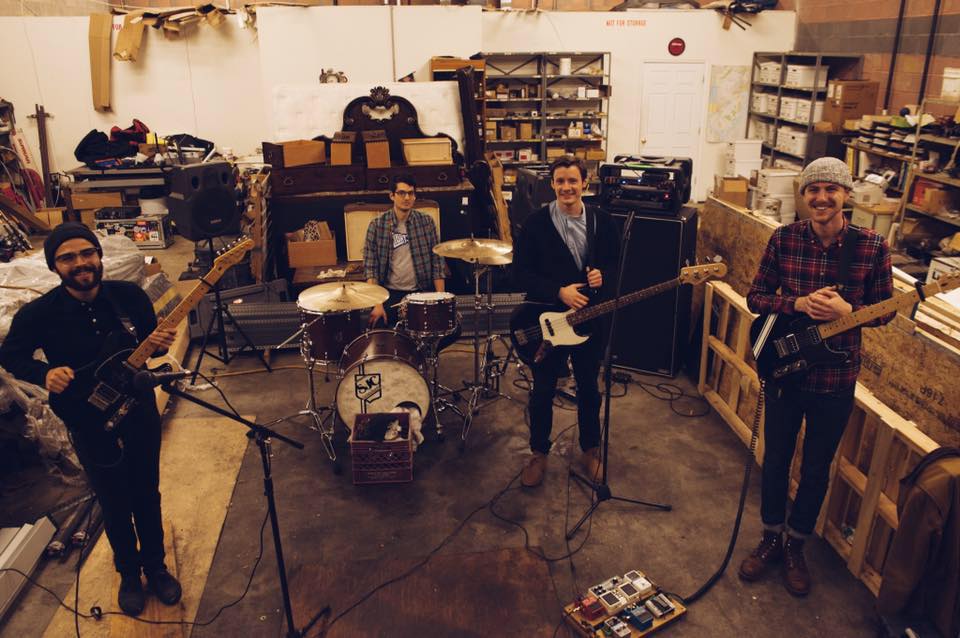 What genre music do you play?

What does your band name mean and where did it come from?

The band name came from the self drying jacket in Back to the Future 2. Joe (the Dryjacket singer) came up with it. He’s fan of  the movie series.

How long have you all known each other? How did you meet?

Brad met Joe through an ex girlfriend, liked his demos, and asked him if he wanted to get together and play music.  Brad and I (Ian) have known each other since elementary school and we started our first band when we were only 10 or 11 years old.  When Brad showed me some of Joe’s music and said they were planning on starting a band, I asked to come to a practice and play bass with them.  The three of us got together and played music with a different drummer, and recruited Adam after 3 or 4 practices.  Brad and I knew of Adam because he had gone to our high school and he played in a band (Heartwell) with Brads older brother.  So apart from Brad and I, most of Dryjacket didn’t become friends until we met up to start the band.

When did you form your band? What inspired you to make music together?

We started Dryjacket in 2014.  We have all played in one or two bands before this one, and I think it’s just always been something we wanted to do individually.  We all have different musical influences, but I think some common ground between the four of us would be bands like American Football, and Death Cab for Cutie.

What has been their biggest hurdle in gaining traction with a following?

Our biggest hurdle has just been getting on tours.  We are a very new band and have only released one EP, so it isn’t easy getting on tours with larger bands.  At this beginning stage our priority should be getting out on the road as much as we can.

What’s something you wished you knew starting out that you know now?

This is kind of a hard question.  We have a very good manager, Joe Marro, who is from the band The Early November.  We have known him for a number of years and he has helped us along every step of the way.  I can’t say at this point if there is anything we’d do differently because Joe always seems to lead us in the right direction.

Where have you performed? What are your favorite and least favorite venues? Do you have any upcoming shows?

Dryjacket has played most states in the US, and we’ve played a show in Canada.  We’ve only had positive experiences with venues so far.  Playing at The Electric Factory in Philly was a really big deal for us because we all grew up seeing our favorite bands play there.  So playing a sold out show on that stage, with the Yellowcard tour, was a pretty incredible experience.

Which songs do you perform most frequently? Do you ever play any covers? Do you have a set play list?

We have only released a 5 song EP and 3 singles.  So we don’t have a fixed set list, but we do usually stick to the same songs with one or two that are interchangeable.

Who writes your songs? What are the main themes or topics for most of your songs? Do you think these topics will change over time?

Joe writes the songs primarily but everyone writes their own parts and helps with song structure.  And all of us (Joe, Brad, and I) write the lyrics to our own vocal parts.  Joe’s writing content covers a number of different topics such as; his rare red meat allergy, parking tickets, anxiety, alcoholism, and his dog. I’m sure over time Joe will continue to write based off his life experiences.

This is your first tour.. how’s it going?

The Yellowcard tour was not our first tour, but it was our first of that size.  Before this our longest amount of time on the road was three weeks and the Yellowcard tour was 7 weeks.  Overall it was just an amazing opportunity.  We made some great friends with the guys from Yellowcard and Like Torches, we got to play sold out shows almost every of the tour, and we picked up a number of fans along the way.  We really could not have asked for a better outcome.  We are Yellowcard fans so it was a privilege to watch them play every night… I actually had a Yellowcard poster in my college dorm room in 2010 so I never could have guessed 6 years later we’d be sharing the stage with them.

What’s the coolest thing about your job?

The best part about being in Dryjacket is playing shows.  We are all happy with the music we’ve made, and its a great feeling to be able to share it with people.

On January 13th we will be releasing our first full length LP “For Posterity” on Hopeless Records.  Pre-orders are available now at dryjacket.com.